Or your email address

Luminale – a city celebrating the light.

Luminale, the Festival of Light in Frankfurt and Offenbach, was founded 2002 as a supporting program for Light + Building, the worlds leading fair for light and building. While fairs and their fair tourism are normally annoying citizens, the topic »light« was spread all over the city in an exciting way.  Today it is one of the most popular events in the Rhein-Main region.

With contributions from artists, companies and citizens the Luminale lights up the streets, churches, public areas and buildings and attracts more than 200.000 visitors. Above that it brings together experts and citizens from different fields to debate the future of urban design.

During the 6 festival days crowds of people are pilgriming along the light walks, everybody armed with a camera. After this time at least one project, or a planning result of general relevance, will be permanently preserved for the city and its residents in the future, and be of benefit ecologically, socially, or culturally. At least this is the goal to make sustainability tangible in the urban space.

The prominence and diversity of the Luminale – supported by the participation of artists, creative people, associations, studios, companies, institutions and interested residents of Frankfurt and Offenbach is exemplified here. As a platform for education and networking it offers also an explorative space for the development of the vision of students and professors.

We from bola think that this is fantastic idea which shows that something great can be achieved provided you  are  looking out of the box. 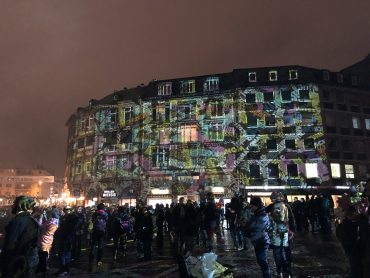 Or your email address